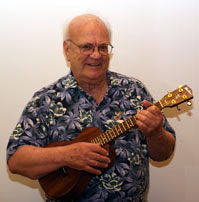 Ukulele giant Lyle Ritz will be performing as an added “legend” this Wednesday night, February 10th at the Ukulele Legends in Concert at the Waterfront at Aloha Tower Marketplace. Bill Tapia, who was to perform in person, will now perform via a media hook up to his home in California. The 102 year old Mr. Tapia who had fallen and broken his hip was not cleared to travel by his physician.

Mr. Tapia had fallen and fractured his hip and underwent surgery over two months ago. He was all ready and excited to come to Hawaii to perform for everyone but was told by the physician that he is still unable to travel. With this sad news, Lyle Ritz, a good friend of Herb Ohta and Bill Tapia has accepted to help with this event.

The Concert’s producers quickly scrambled when they received the news that Mr. Tapia would not be coming in person. Through the magic of modern technology and the kind assistance of Lori Estrada of ACN communications a video phone hook up is being put in place to have Bill able to perform at the event. ACN will provide the hardware and technology to beam a video and audio feed to a large screen at the event.

Lyle Ritz firmly owns the right to be called an ukulele legend. He was one of the first to record and treat the ukulele as a bona fide jazz instrument. The ukulele is often considered a novelty instrument when in its usual Hawaiian surroundings, but Lyle Ritz never felt that way. Born in Cleveland, OH, Ritz studied violin and tuba as a child. While attending college in California, he found a job at the Southern California Music Company in Los Angeles. Working in the “Small Goods Department” meant he took care of harmonicas, accessories, and the instrument that was to become his love, the ukulele. It was the ’50s and he started by playing the hits of the day and some novelty numbers. Guitarist Barney Kessel was also working as an A&R man at the Verve record label at the time, and when he heard Ritz playing live he quickly signed him. Verve released Ritz’s albums How About Uke? in 1957 and 50th State Jazz in 1959. The albums did well in Hawaii but failed to get much attention on the mainland past hardcore jazz collectors. Ritz gave up playing the ukulele professionally and switched to bass.

Ritz experienced a steady stream of work during the ’60s and ’70s as a session musician in Hollywood. Herb Alpert’s “Taste of Honey,” the Righteous Brothers’ “You’ve Lost That Lovin’ Feeling,” and the Beach Boys’ “Good Vibrations” are just three of the 5,000 recordings that feature his bass playing. Ritz later found work in the world of television and film, and his bass was part of the soundtrack to The Rockford Files, Name That Tune, and Kojak, to name just a few. The only work he found with his ukulele was when he was hired to play the parts Steve Martin would pretend to play in The Jerk, but his fandom in Hawaii was slowly growing. Ukulele player and record producer Roy Sakuma hunted Ritz down in 1985 and brought him to the islands for a festival. Ritz had no idea his Verve records were the stuff of legend in Hawaii, but it did influence him to return to the festival during the next three years. In 1988 Ritz decided it was time to “retire” to the islands with his wife, but he still kept up his playing; Roy Sakuma Records released Ritz’s third album, Time, that year. In 2004, Verve reissued How About Uke? Currently living in Oregon, he continues to play his loving tenor ukulele with his unique style.