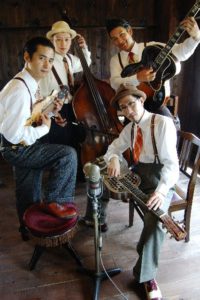 Sweet Hollywaiians are based in Osaka,Japan. They were originally street musicians who share a common passion of Hawaiian, Swing, Ragtime, Blues, Calypso and Italian for the 1920s~1930s string band tradition in collecting the music of long forgotten legends like Sol Hoopii, King Bennie Nawahi, Roy Smeck and Eddie Lang.

sweethollywaiians_01.jpgThis string quartet containing a dozen of string instruments like a Hawaiian steel guitar ( a lap steel guitar), banjo, tipple, ukulele, mandolin, a bass and guitars. Most of the members are multi-instrumentalist and they change their instruments song by song.

Since they founded their band in 2002, so far they have released four Albums,”Ticklin’ The Strings”,”Hula Girl”.”‘O Surdato ‘nnammurato”,”Maile Swing”. And they have gone to many over sea live performances and earn the great reputations from the audiences in the U.S.A, Canada, France, Belgium, Netherlands and of course Japan.

Come and meet them at 2011 Ukulele Picnic in Hawaii!